In the crypto market, there are a variety of unknown terms to beginners. However, they are important, as they describe resources or technical characteristics that can help you develop operational strategies.

For example, between the years 2016 and 2018, there was an increase in the Bitcoin hash rate, in contrast, the prices of digital assets decreased dramatically, which caused several players to withdraw from the Bitcoin mining market. 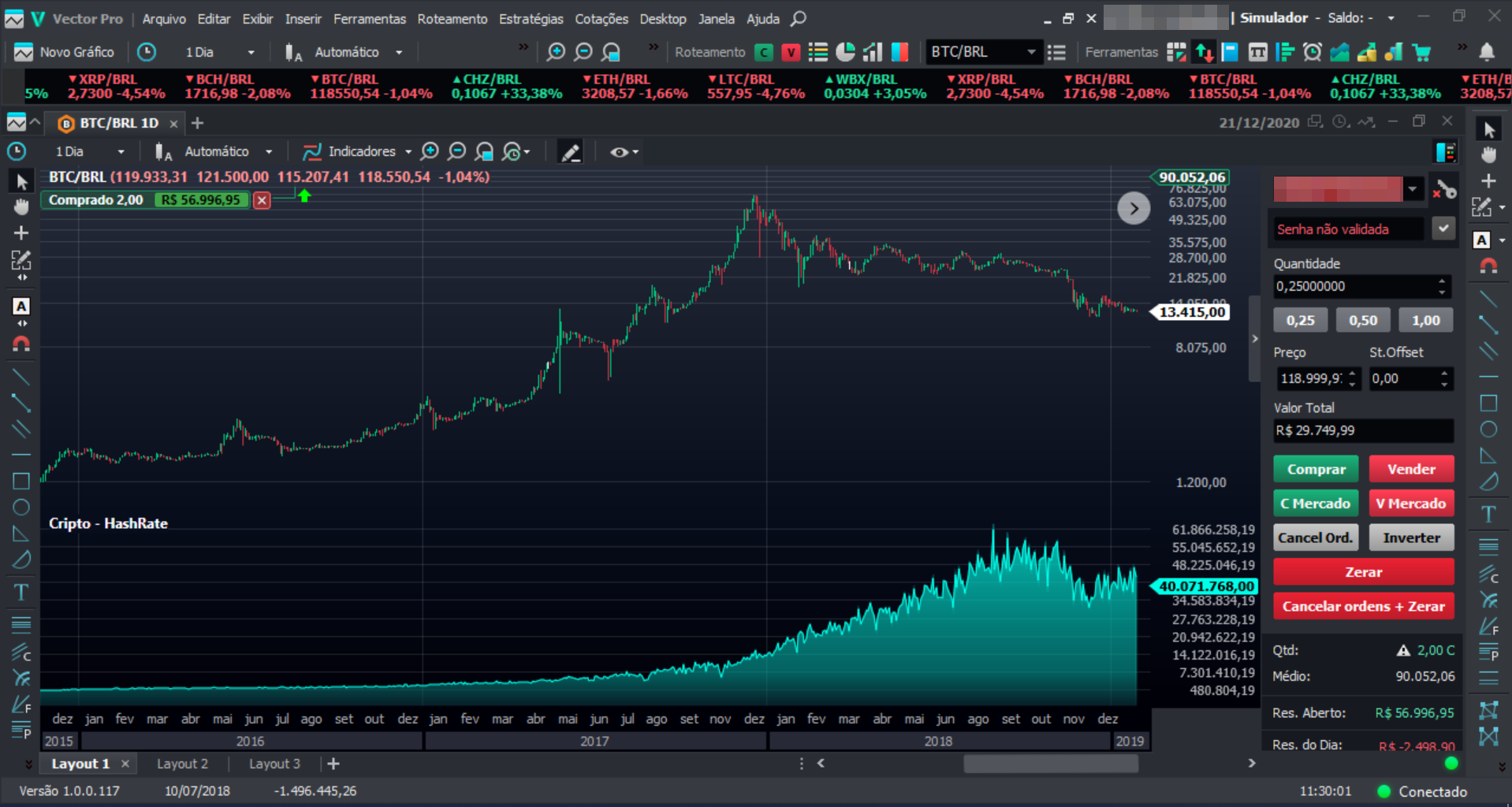 It is essential to have an understanding of the hash rate indicator relevance, especially to those who wish to enter the cryptocurrency market as long-term investors.

Mining is the process by which cryptocurrency transactions are verified and recorded on the Blockchain. The work done by the miners is essential for maintaining the integrity of the network and for introducing new bitcoins into the system when solving complex sequential calculations.

New digital assets are generated by the mining process by following a predefined set of rules. Taking Bitcoin as an example, as the number of miners increases, so the hash rate, increasing the speed of generating new blocks on the network.

In addition to cryptocurrencies, the miner is also remunerated with the fees paid by users who are sending Bitcoin transactions. All of this is possible thanks to the Proof-of-Work algorithm.

Proof-of-Work, also known as PoW, is a mechanism designed to avoid double-spending on the Bitcoin network. Nowadays, the main cryptocurrencies use PoW as their consensus algorithm, being one of the main methods guaranteeing the integrity of the Blockchain.

This is where Proof-of-Work comes in. It ensures that users are not using money that they are not entitled to spend. Using a combination of game theory and cryptography, the PoW algorithm allows anyone to update information on the Blockchain, according to the rules of the system.

PoW requires miners to use their computing resources until a solution to a puzzle is found. This solution is the hash of the block. The data contained in the hash works as a “fingerprint”, being unique for each block.

What is the Bitcoin hash rate?

Hashrate is an indicator of the computational power used during the Bitcoin mining process. This indicator is measured in units of hash/second, which means the number of calculations that machines can process each second on the Bitcoin network.

The higher the hash rate of a machine, the greater the chance of mining a block and receiving bitcoins as a reward. This is the main reason why miners come together in mining pools, to bring together the computational powers of their machines.

If they find the hash solution before the other competitors, the amount of bitcoins received is directly proportional to all participants in the pool, being proportional to the computing power of each one.

What does the hash rate do?

The hash rate indicator measures the computational power in Proof-of-Work networks, such as the Bitcoin Blockchain, for example. To be able to calculate the next sequence of the block, it is necessary to have a competitive mining machine, composed of a CPU (processor) and GPU (graphic card) of the last generation that tries to solve the PoW “puzzle” exhaustively.

The hash rate describes the number of calculations, verification, and validation that computers connected to the Blockchain network do each second, combining the results into a single hash value.

Why is the Bitcoin hash rate important?

The hash rate is important for two reasons: first, for investors who depend on a Blockchain Proof-of-Work, the hash rate helps in predicting the verification calculations of the blocks being formed.

The second reason is the analytical importance for Masters Nodes, who monitor the performance of the Blockchain network, taking into account the level of adjustable difficulty and the mining time. 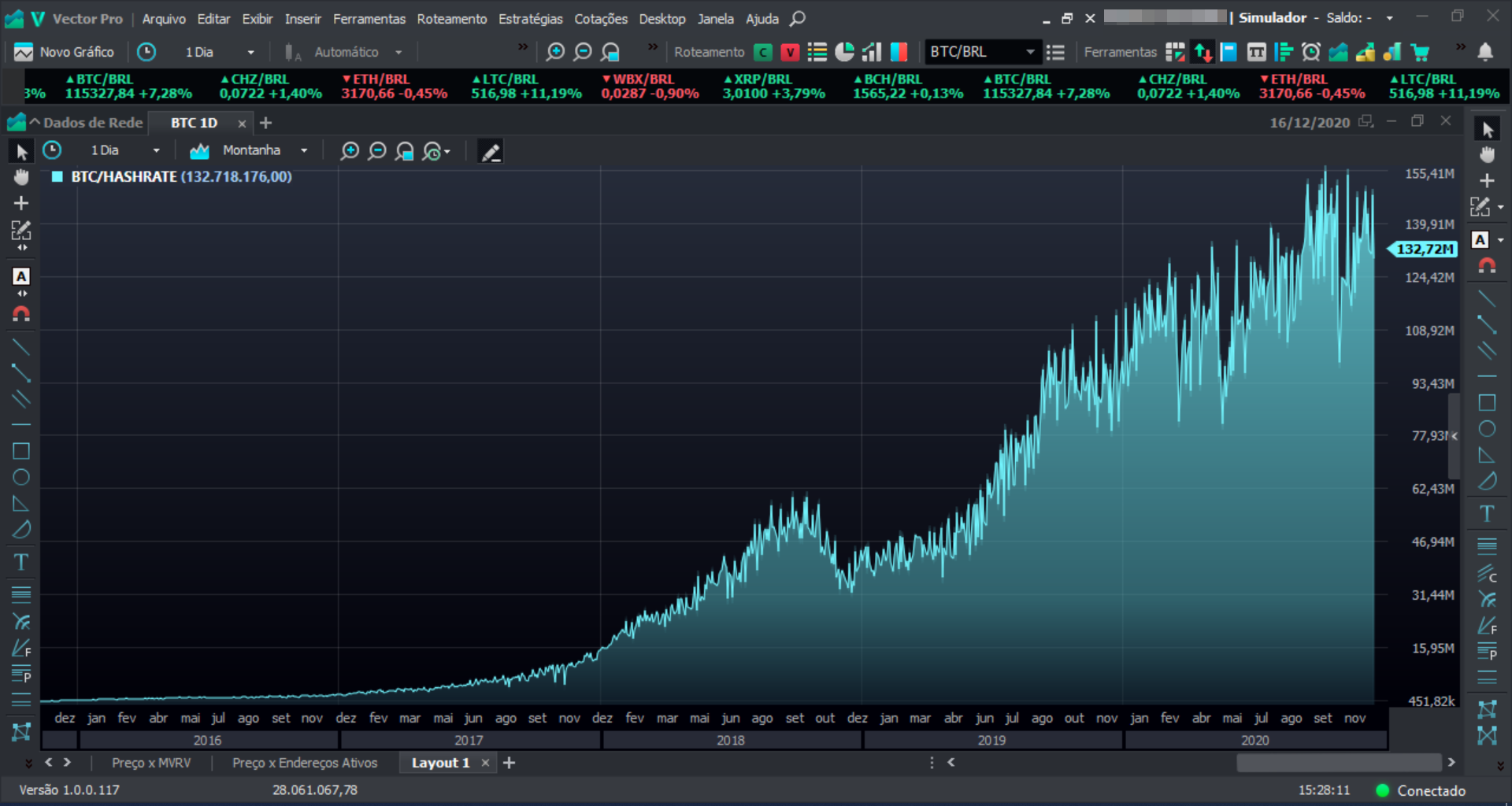 Looking at the properties of the Bitcoin hash rate, we find the ratio of the high hash rate with the increase in mathematical operations within the 10 minutes available for closing the block.

For example, if a large number of miners are working on a block, the one with the highest hash rate will solve most of the calculations, receiving most of the reward.

Can the hash rate change?

Yes, and Bitcoin is a great example. In the Bitcoin Blockchain, for example, the hash rate has increased significantly in recent years. The reason was the growing interest in trading, the increase in transactions with Bitcoin, and the upgrade in computational processing capacity.

How to use hash rate in practice?

The hash rate is essential, as it has a great influence on the security and sustainability of the Bitcoin network since the miners' earnings are related to the hash rate, because the higher the hash rate, the more blocks are being mined.

So, how can you find out the network hash rate? Adding the computational power of all the miners that make up the Bitcoin network. 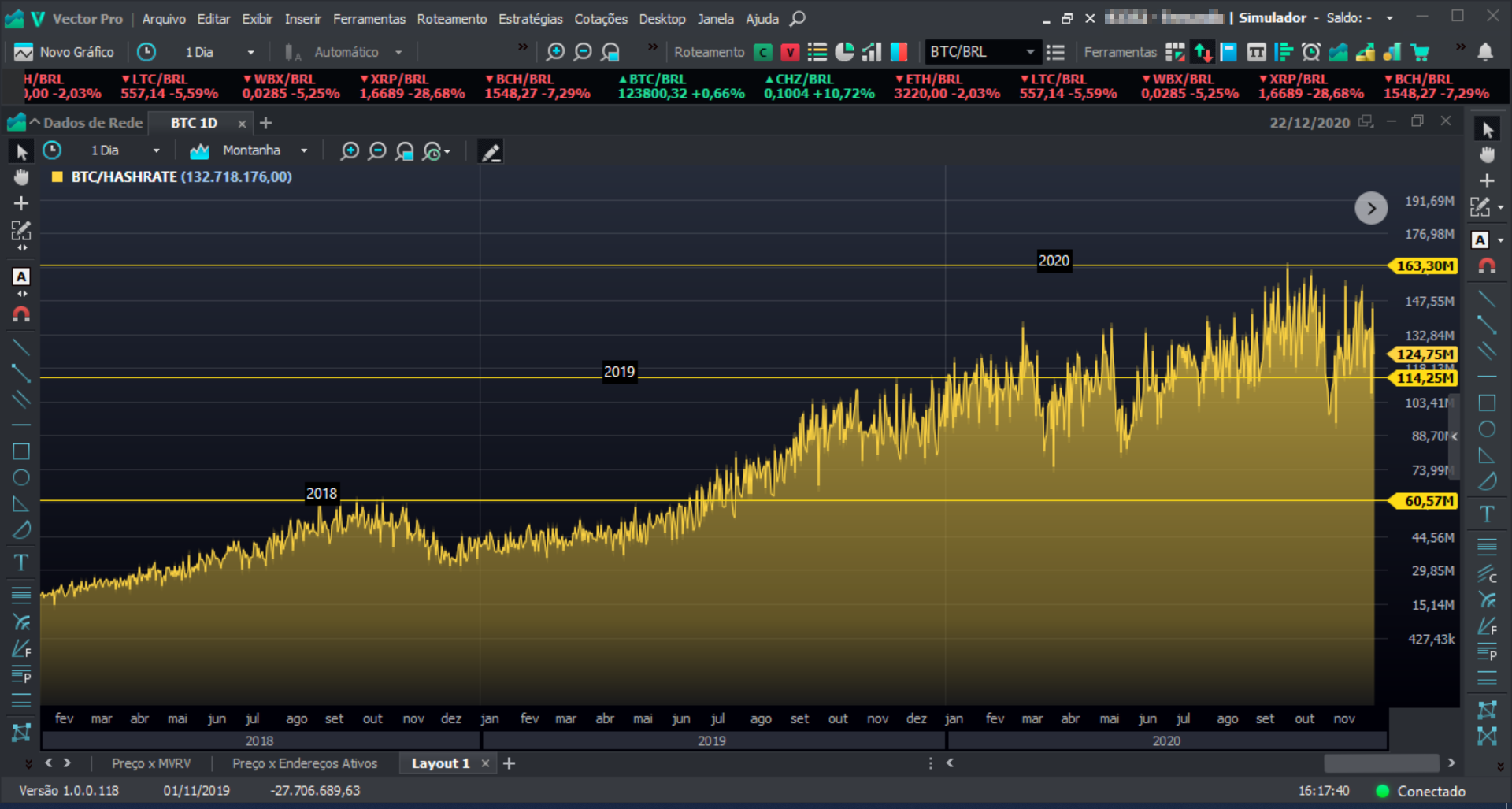 This calculation is done as an estimate based on the number of blocks mined and the difficulty of mining on the network since it is not possible to know exactly the mining power of Bitcoin. 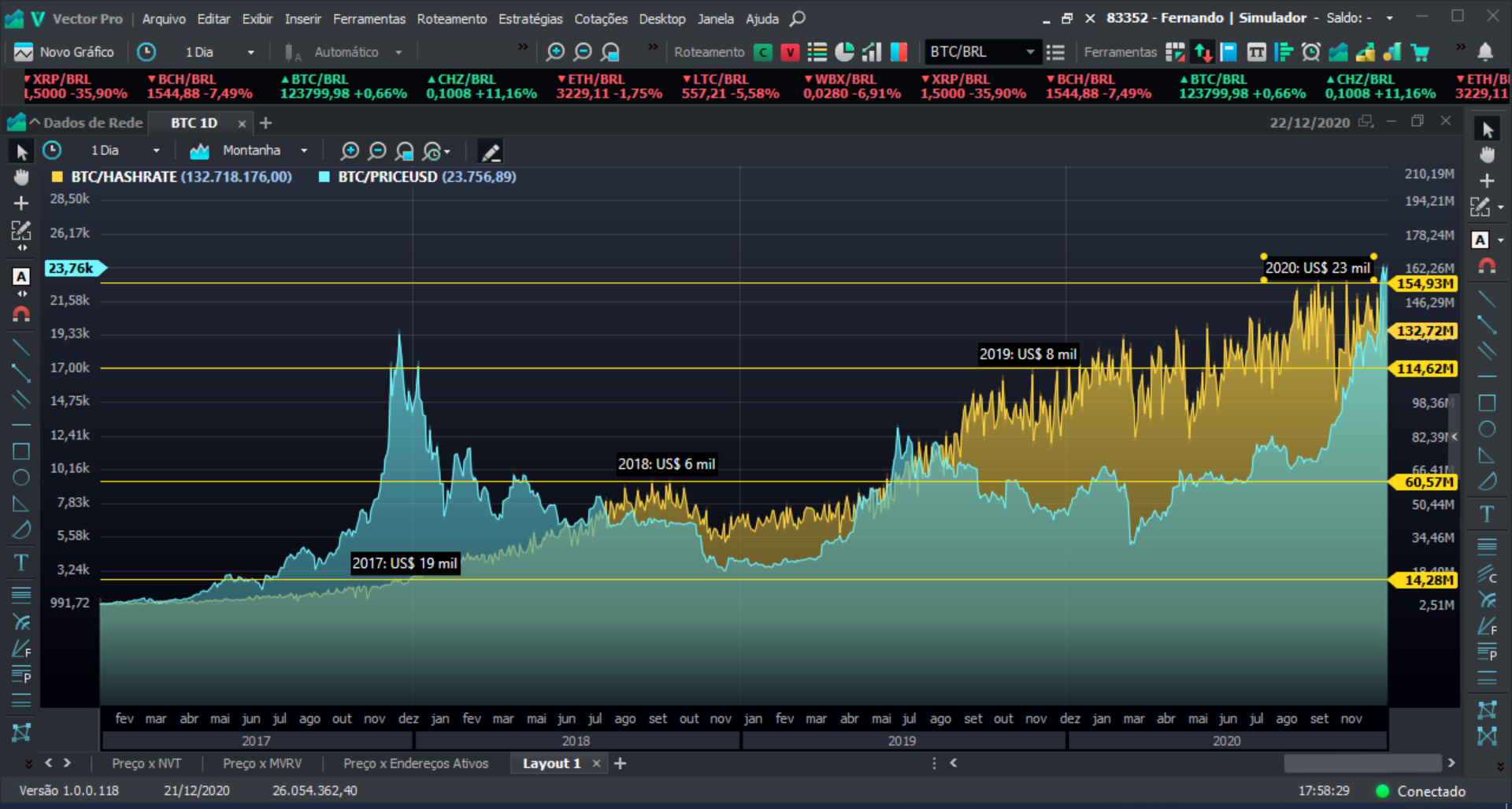 In yellow, the Bitcoin network hash rate between the years 2017 to 2020. In blue, Bitcoin price in the same interval.

Summing up, the hash rate is one of the health indicators of the network, indicating that even in times of correction of Bitcoin values, as occurred in the interval between 2018 and 2019, the hash rate continued to increase, demonstrating the confidence of miners and users carrying out purchase and sale transactions of the asset. This is even more evident from July 2019, when Bitcoin reached $ 8,000, the hash rate reached 114.25 MH/s and continued to rise until December 2020, when Bitcoin broke the record $23,000, with a hash rate of 163.3 MH/s.

Now that you know everything about the Bitcoin hash rate and how important it is for the analysis of On-Chain data, you can use this indicator to your advantage when creating operational strategies and understanding in a deeper way which is the best time to enter or leave a position.

Hey! Was this content helpful?
Please rate it below! It's important that we work together to make our Help Center even more complete.
Happy trading!

Article is closed for comments.